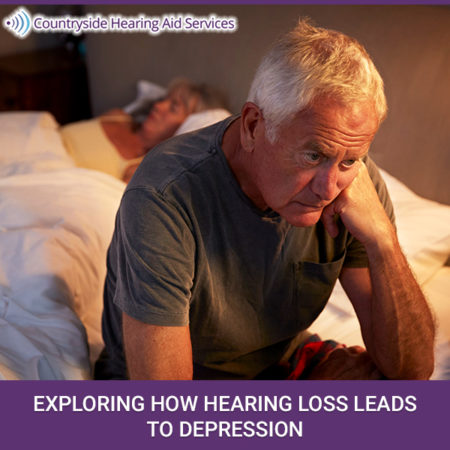 Today, 1 in 3 adults over the age of 60 have hearing loss, with 4 in 5 adults over 80 having the same condition. These numbers are global, and effect people in countries around the world.

Hearing loss is, in some respects, a natural part of aging, as overtime exposure to noise and declining health conditions all cause hearing to decline. However, there are more severe consequences to hearing loss than the inability to hear itself.

As doctors and politicians have slowly begun to discover, hearing loss has a severe impact on the mental health of the hearing impaired. And as people grow older and life expectancies extend, it is vital that the aging population is able to lead rich and fulfilling lives.

Some of the consequences of hearing loss include increased dependence and extreme social isolation, both of which greatly increase the chances of developing depression, which itself comes with a host of negative symptoms.

In 2009 Macquarie University broke new ground with the Australian Blue Mountains Hearing Study, which was created to help understand the effects of hearing loss on mental health and how these effects can be counteracted.

1,328 Australians, all over age 60, were brought in and interviewed for the purposes of the study. Out of this population, people hearing loss were 64 more likely to show signs of depression.

The follow-up study, co-written by Dr. McMahon five years after the original project, found that the hearing impaired were 80 percent more likely to be depressed and to report that hearing loss had negatively affected their personal and social lives.

The SENSE-cog project, a pan-European hearing research project, has printed studies indicating a link between hearing loss and major depression while having hearing and vision loss dramatically increased the odds of both depression and anxiety even six years after the original follow-up study.

While hearing loss can be harmful to a person’s mental health, there are ways of addressing the mental effects of hearing loss. Specifically, hearing therapy and the use of hearing enhancement devices.

Hearing aids, in particular, are very effective at reducing the negative effects of hearing loss on mental wellbeing, as the Blue Mountain study found that people with hearing aids were less likely to be depressed, at a rate of 32 percent compared to the regular study. These results are backed up by two more experimental trials from the same group.

The Blue Mountain results are corroborated by a study from the Netherlands in 2012, in which the use of hearing aids led to a 30 percent decrease in depression rates in aging care facilities. These two studies help to confirm that hearing rehabilitation is key to preventing the negative effects of hearing loss.

In March of 2019, the Council of Australian Governments endorsed the Australian Roadmap for Hearing Health, a program centered on developing preventative programs and expanding access to healthcare in relation to hearing loss, with raising awareness being one of the top goals of the program.

Professor McMahon has continued to support hearing loss initiatives both in his own country and abroad, hoping to change not only how we understand the effects of hearing loss but how we treat it.

The consequences of hearing loss can be avoided by earlier identification, greater access to hearing care, expanded psychological testing, and by social acceptance and awareness of hearing impairments. These steps will not only reduce the negative effects of hearing loss, but expand our ability to connect and communicate with each other.

Ensuring the mental health and wellbeing of the hearing impaired is the primary goal of Countryside Hearing Aid Services.