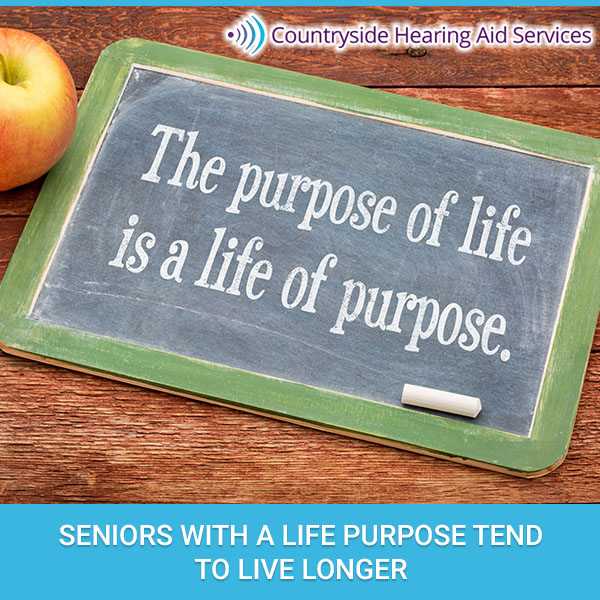 A recent study that was published in JAMA Network Open concluded that seniors who believe there’s a purpose to their life are much less likely to die from heart, circulatory, or digestive diseases. Instead, they’ll actually live longer lives.

What the Latest Research Says

In this recent study 7,000 people over the age of 50 were followed for over a decade. In doing so, researchers discovered that those who felt like their lives didn’t have a purpose were likely to die sooner than those who found a reason to live. This isn’t only true in the U.S., but it’s been proven in various populations throughout the world by other studies.

Each person’s life purpose will be different because it has to do with what they as an individual find to be the most valuable to them. This can include things like community, kindness, achievements, spirituality, their reputation, and even their relationships.

In 2006 a study of 6,985 people was conducted in which participants rated a list of 7 items (making plans for the future and making them a reality; whether daily activities felt trivial; whether they felt like they understood what they were trying to accomplish in life; whether they’re living day by day without any thoughts about the future) regarding how important these things were to their lives. The scale ranged from one to six.

Those who scored higher on this survey were said to have a greater life purpose in comparison to those who scored the lowest. When researchers followed those participants who scored the lowest they discovered these people were 2.43 times more likely to have died by the time they concluded their study. They were also twice as likely to die from digestive disorders than those who received the highest scores in this study. Other studies discovered that people with a low life purpose have higher inflammatory markers (e.g. stress hormones).

What This Means for Senior Living

The good news is that you can change your life purpose score. Even doing something as simple as engaging in meditation or yoga is enough to help build up your life purpose. Volunteer work also has a positive effect on your overall well-being. Rick Morycz, associate psychology and social work professor at the University of Pittsburgh Medical Center says there are other studies that suggest volunteering is beneficial to seniors. With these thoughts in mind, researchers strongly encourage the inclusion of such activities in your senior living lifestyle.

Morycz believes that by being more altruistic and engaging in compassionate behavior you’ll live longer. This is why he helps his patients find goals and meaning in their lives by trying different volunteer activities. He says this doesn’t even have to be a structured activity, although it does need to be done on a regular basis.

While having a life purpose is an important part of senior living, you must be able to hear what’s going on around you so you both know and understand this purpose. For help maintaining good hearing health reach out to Countryside Hearing Aid Services and schedule an appointment today.