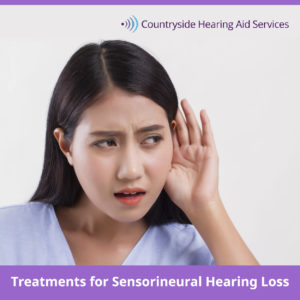 When Pat was 19 months old she was diagnosed with a bilateral sensorineural hearing loss. The problem was of moderate to severe level. In terms of normal people, she had become partially deaf in both her ears. But she has lived for more than 19 years in the mainstream world. It has been a long journey though, in order to reach where she is. When she was two and half years old she went to a normal school and realized that most children of her age were watching Sesame Street at home during that period but she was not able to do so due to her hearing loss. Her parents realized her predicament and decided to take early action and admitted her to a school for the deaf. They planned to keep her there for a few years. But she Read More +

The American Academy of Otolaryngology says that approximately 66,000 people in the United States are diagnosed with sudden sensorineural hearing loss (SSNHL) yearly. This isn’t something that’s caused by traumatic noise. Instead, your inner ear becomes inflamed. Oftentimes this is accompanied by both vertigo and tinnitus (ringing of your ears). Understanding SSNHL This type of hearing loss is very scary because being unable to hear is disorienting. However, the sudden onset of SSNHL also causes people to wonder if they’re having a stroke. This is why people need to be more aware of it – especially those who are in their late 40s and early 50s since this is the age group in which it is typically seen. Unfortunately, doctors don’t know why this happens. However, there are some who believe that this is a metabolic syndrome. What to Know Read More +

Today there are approximated one million Americans who have been diagnosed with Parkinson’s. Research shows that typically men are diagnosed with the disease earlier in their lives than women, which is why they suffer more than women. These same studies also show that this disease’s symptoms vary depending upon a patient’s gender. Additionally, it’s been proven that Estrogen plays an important role in either delaying or preventing the age-related cognitive decline (e.g. memory loss) that’s related to this disease. Today, there’s even an article that there’s some relief for these patients to be found in dancing. This activity has been shown to not only provide some relief from the disease’s debilitating symptoms, but that dancing can also help these patients to maintain the quality of their lives. Understanding What Parkinson’s Disease Is This disease is a type of degenerative condition Read More +

There’s evidence that through lifestyle modification seniors can help preserve their memory. They can also delay the onset and slow the progress of cognitive decline, dementia and Alzheimer’s. Thankfully, there are several memory exercises that you can perform to keep your memory sharp as you grow older. Practice and Performance In 2010 and 2011 a young man named Wang Feng won the world memory championship. At only 21-years-old he was able to recall anywhere from 300 – 400 numbers that were spoken to him at a rate of one per second. He could also memorize the sequence of a deck of cards that was shuffled – something he only had 24.21 seconds to look through and memorize. Many people wondered how he was able to do this. Well, the key lies in the fact that he practices every day for Read More +