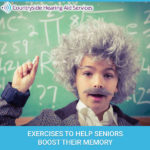 There’s evidence that through lifestyle modification seniors can help preserve their memory. They can also delay the onset and slow the progress of cognitive decline, dementia and Alzheimer’s. Thankfully, there are several memory exercises that you can perform to keep your memory sharp as you grow older. Practice and Performance In 2010 and 2011 a young man named Wang Feng won the world memory championship. At only 21-years-old he was able to recall anywhere from 300 – 400 numbers that were spoken to him at Read More +