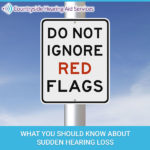 The American Academy of Otolaryngology says that approximately 66,000 people in the United States are diagnosed with sudden sensorineural hearing loss (SSNHL) yearly. This isn’t something that’s caused by traumatic noise. Instead, your inner ear becomes inflamed. Oftentimes this is accompanied by both vertigo and tinnitus (ringing of your ears). Understanding SSNHL This type of hearing loss is very scary because being unable to hear is disorienting. However, the sudden onset of SSNHL also causes people to wonder if they’re having a stroke. This is Read More +