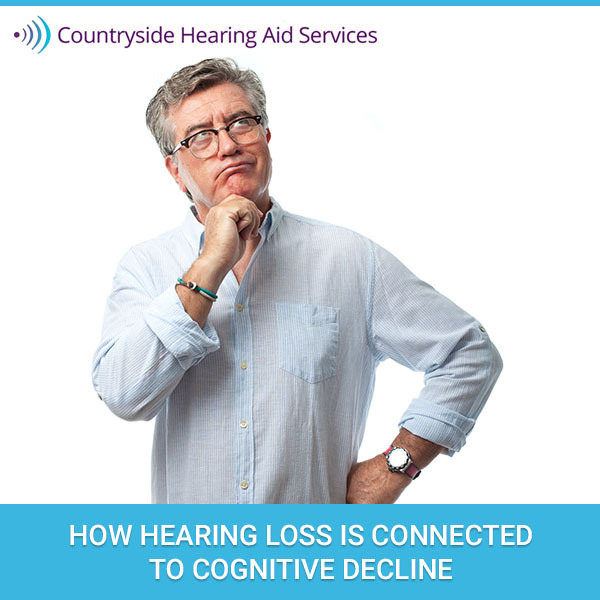 As we grow older, we are at a higher risk of having our cognitive skills and hearing decline. This often results in what’s called “senior moments” which occur more frequently when you’re genetically inclined towards dementia. Essentially, what this means is that as we grow older the connections between our brain cells become damaged or lost (a.k.a. brain atrophy, cognitive decline).

The Link Between Cognitive Decline and Your Hearing

In addition, there have been numerous studies conducted that show a definite association between hearing loss and cognitive decline. This has resulted in a lot of additional research into this topic. Currently researchers don’t know if the loss of hearing adds to the person’s dementia or if these two health issues simply occur concurrently. There are numerous studies currently going on in hopes of gaining clearer information in this area.

Just because you’re struggling to understand speech or becoming exhausted by having a simple conversation doesn’t mean you have dementia. You may simply need hearing aids because these hearing loss oftentimes mimic the symptoms of cognitive decline. Most research is showing that if you do have a mild, moderate to severe hearing loss, you are two to five times more likely to develop signs of dementia. With this in mind, you should take as many precautions as possible (e.g. taking prescribed medications as recommended, remaining active, healthy lifestyle choices and being socially engaged) to help minimize potential cognitive decline.

How Your Brain Changes When You Lose Your Hearing

Some areas of your brain do seemingly shrink when you lose your hearing. These are the areas that are responsible for your auditory responses. Jonathan Peelle of Washington State conducted research in which he discovered that older adults who suffer from hearing loss aren’t as active when focusing on intricate sentences – something shown through brain scans in which it was also discovered that these older adults auditory areas contained less gray matter. Whether this is something that accumulates over time or is caused by age is yet to be understood. Nevertheless, this means that older adults performed significantly worse on speech comprehension tasks because they weren’t able to hear what was happening.

Research doesn’t have a definitive answer to whether hearing aids can help improve people’s cognition. Nevertheless, they’re still a valuable tool since they can help prevent social isolation. This is why many researchers believe that this is something that should be investigated further. Currently there are only several studies finding no conclusive relation between the use of hearing aids and cognitive decline while several other studies point out that such an association may exist.

While studies are ongoing, there was a recent “larger” study aimed at finding better answers for this issue and in doing so concluded that the use of hearing aids do help delay the onset of dementia, cognitive impairments, and depression.

When you notice that you’re suffering from any type of hearing loss you should contact Countryside Hearing Aid Services. They can perform a comprehensive hearing evaluation to help determine if hearing aids could be of help. Don’t let hearing issues interfere with your life, contact them today.