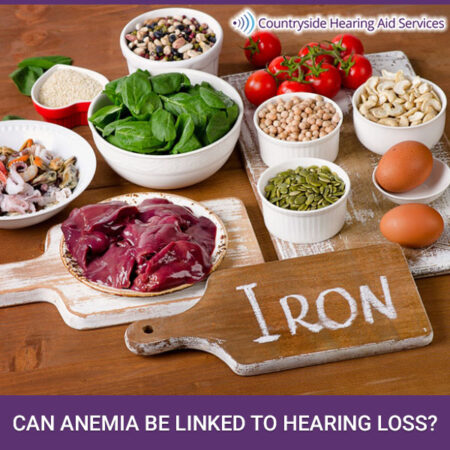 Anemia, or an iron deficiency, is one of the most common blood conditions of the 21st century. JAMA Otolaryngology-Head & Neck Surgery recently published a study that investigated a possible link between anemia and hearing loss. With both conditions affecting a large population of the United States, it’s a link well worth exploring.

Hearing loss can be caused by many things such as high blood pressure, diabetes, smoking, and general poor health, but one thing is for sure, most people in the US will be affected by it at some point in their life. Around 15 percent of American adults have at least some degree of hearing loss, and that percentage jumps to around 60 when you only consider senior citizens. Despite hearing loss being such a widespread issue, it causes are not fully understood, and risk factors are a topic of current research.

One recent study considered a possible link between sensorineural hearing loss and anemia has shown a promising link. Sensorineural hearing loss (SNHL) is categorized by a sudden decline in hearing quality over a period of 72 hours. The study led by Kathleen M. Schieffer at Pennsylvania State University College of Medicine and was designed to clarify a possible link between iron deficiency anemia (IDA) and SNHL.

IDA is brought on by a low level of iron, which leads to a lower number of red blood cells. Red blood cells are what carries oxygen around the human body, so anemia ultimately leads to a lower amount of oxygen circulating the body for tissues to use. While IDA affects about 5 million Americans, it’s very easy to treat in most cases, so a link between IDA and hearing loss could go a long way in preventing hearing loss in adults.

In the Pennsylvania State University study, data was collected from over 300,000 adults with an average age of 50 years old. Using blood analysis techniques, the researchers were able to identify which if the subjects had IDA. These results were then compared to the information gathered from hearing tests. Both conductive hearing loss (caused by the inner ear bones) and SNHL (caused by cochlea or nerve damage), as well as an unspecified hearing loss, were analyzed, and the results showed that both SNHL and conductive hearing loss were associated with IDA.

It’s important to note that while this study has discovered a potential link between anemia and hearing loss, it did not discover the exact mechanisms of that possible relationship. Current theories on why this relationship exists include that lack of iron in the blood can lead to limited blood flow through the sensitive labyrinthine artery in the inner ear. Other research has also shown that patients with vascular disease are more susceptible to SNHL, further indicating that blood flow to the inner ear is a factor when it comes to hearing loss. Another theory is that myelin, which coats the important nerves in the ear is weakened by low iron levels. This would potentially open the sensitive nerves up to more damage which can cause hearing loss.

There is still a lot of work to be done before the relationship between IDA and hearing loss is fully understood, but this study is a promising start. The next step would be for scientists to corroborate this study which one which investigates whether treating IDA has a positive impact on reducing hearing loss. Hearing loss can seriously affect someone’s quality of life, and finding cost-effective treatment is one of the biggest obstacles patients face today. For more information on treatment options for those suffering from hearing loss, contact Countryside Hearing Aid Services.