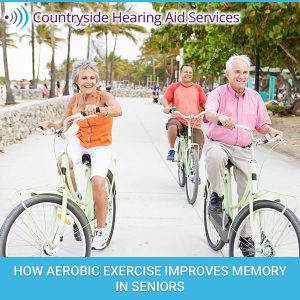 Deep within the center of your brain there’s a small structure known as the hippocampus. Smaller than your little finger, it plays a vital role in learning and memory. Without it you’d only be able to remember old memories, not form new ones. Unfortunately, it does shrink as you age, which is why many seniors suffer from dementia. It doesn’t have to be this way though, there’s good news when you want to improve memory in senior citizens.

Seeing What Research Says About Exercising

There are several studies that show moderate aerobic exercise on a regular basis cause new neurons to grow in your hippocampus. This is because BDNF (a brain protein) increases and “fertilizes” new brain cells.

Additional evidence of this was gathered when 120 healthy seniors (between 60 – 80-years-old with no dementia or memory problems) were “studied” over a year. In this study the seniors were divided into two groups: people who’d engage in aerobic exercise (walking on a track three times a week for 40 minutes each time – about three miles per session) and those who’d engage in stretching and light-strengthening exercises.

It’s also important to mention that members of the toning and stretching group lost about 1.5% of their hippocampus’ volume. According to researchers, this is about a 3.5% difference between the two groups.

While these results are small, they do suggest that aerobic exercise protects your hippocampus from the normal shrinkage that it’d otherwise undergo. At the same time, it will also add new cells to your hippocampus and increase your BDNF. As stated earlier, these are two important factors in helping to improve memory in senior citizens.

Understanding the Importance of Exercising

Researchers understood that growth in the hippocampus is important, but they were still wondering if this was enough growth to improve memory in senior citizens. Fortunately, they did give both groups of participants memory tests before and after the study. In specific, these studies reviewed their “spatial memory” (recording information about the environment, e.g. neighborhood, grocery store layout).

In the beginning both groups scored similarly, but at the end of the year those who were members of the aerobic exercise group showed significant improvement while the non-aerobic group showed no improvement at all.

One Other Key Element that Helps Improve Memory in Senior Citizens

As if you didn’t already have enough of a reason to want to help improve memory in senior citizens, you should know that hearing is another factor that affects memory. Losing it will affect your memory in three important ways, including:

To help improve memory in senior citizens it’s important to have a yearly hearing exam. Contact Countryside Hearing Aid Services and set up your appointment today.